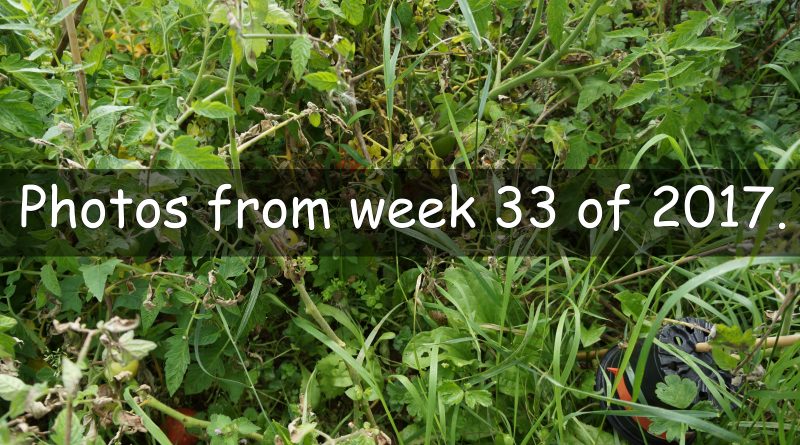 Another week and another collection of photos taken on my plot. this week being week 33 of 2017 I have mostly been dealing with blight.

Blight on the plots.

Blight has been attacking my tomatoes lately as you can see with these photos. A couple of weeks ago I covered blight in a podcast so it seems very suited to have succumbed to this. It is a very nasty fungal disease that attacks tomatoes and plants. As soon as I see this infection I have to take action. The best course I find is to cut away the infection to try and stop it getting worse. however, when it is as serious as I have got it I find it best just to uproot the infected plants and burn.

Another tip that I swear by is to use blight resistant varieties. I have used crimson crush variety for a few years with a lot of success, however, this year I am experimenting with another variety called mountain magic and so far these have been outstanding. Crimson crush tends to still catch blight but shrugs it off and continues to grow. Mountain magic so far has shown no signs at all of catching the infection which I have found truly impressive.

Each week I share a few photos of what I have harvested and this week I have a good collection for you. I certainly have enough harvests for a few meals.

This week I have harvested a really decent beetroot. beetroot has been pretty successful this year and the rain over the summer has certainly produced some good beetroot.

I have also harvested a few leeks. These are a bit early for me but they were a decent size and went well with our roast pork.

This year I attempted to grow some giant onions. while I did manage to grow some onions a number of seedlings that didn't survive are quite high. I also believe I may have planted these out a little late and perhaps could have looked after these better. However, I had a few decent size onions and perhaps next year will be more successful.

I also harvested a few home-guard potatoes. These have been disappointing this year. Usually, these are 1 of my favourite potatoes to grow. however this year we had a late frost and I believe this stunted growth and didn't produce much in the way of tubers. The picture shows what I got out of 3 bags.

This year the French beans have been in plentiful supply. each week I am getting a good harvest of these.

I also managed to get my first apple of the year. This is from my eating apple tree of which I believe the variety is called family.

I managed to salvage some ripe tomatoes before they caught blight.

I have also managed to get more Brussel sprouts. These are from a plant planted in 2016. It produced in 2016 but I then cut the top off about an inch from the ground. this then regrew a new stalk and has produced these.

Although it is late in the year to be harvesting most rhubarb. I needed to clear some as the stalks were growing over the path. This was making passing difficult so I harvested these stalks and will turn them into crumbles etc.

So that's it for this week. Please leave any comments or suggestions below.