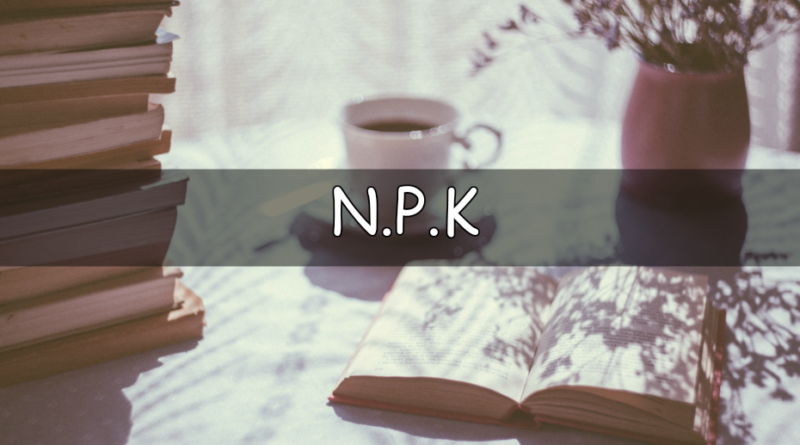 Its that time of the week to look at my understanding of a horticultural word or term. This week we are looking at N.P.K.

N.P.k can normally be found written on commercial plant feed or fertilisers. Normally followed by a set of numbers such as 5.5.5. N.P.K stands for the three elements essential for growing strong healthy plants.

N is for nitrogen

A plant requires a decent supply of nitrogen in order to grow plenty of leaf, stem and branches. This means that vegetables that we grow that are leafy, such as salad leaves and cabbage, will need a good supply of nitrogen. The more leaf a plant produces the more nitrogen it requires. Although our atmosphere is mostly nitrogen, most plants are unable to use and need to source the nitrogen contained in the soil. Nitrogen is easily washed out the soil during rain which is why we need to feed our soil with a nitrogen feed from time to time. Nitrogen hungry crops such as brassicas will deplete the nitrogen from the soil pretty quickly which is also a reason to rotate our crops. Plants in the legume family have a pretty awesome skill. They are able to take in nitrogen from the air and store in nodules in the roots allowing the soil to be feed with nitrogen.

P is for phosphorus

A plant requires phosphorus in order to promote seed germination and produce good strong roots. Young plants feed with phosphorus will grow strong with a good root system. Root crops such as carrots and beetroot are pretty hungry for phosphorus as we are producing an edible root. Phosphorus will remain in the soil for quite a while so the amount found in a general fertiliser is usually enough.

K is for potassium

A plant requires potassium for flower and fruit production as well as helping plants fight off disease. Fruiting plants such as tomatoes and apples require this element. Its Latin name kalium is why we use the letter k for this element. It can also be known as potash and this is in part due to wood ash having pretty high levels of potassium in it. Again this element will remain in the soil for a long time but growing vegetables will deplete this. I like to add wood ash to my vegetable beds as well as adding a fertiliser to the soil, in order to keep the potassium levels up.

What about the numbers

The numbers are a representation of the level of each particular element. 5.5.5 is an even amount of all three elements and considered a balanced or complete feed. Whereas 10.0.0 will only have a nitrogen element contained within it and be considered an incomplete feed. An incomplete feed is not inferior but is more a way of controlling the particular element for the crops. For example, if we were growing a leafy salad crop in one area we may only use a nitrogen feed in order to encourage leaf growth and avoiding potassium in order to avoid flowering. However, for the vegetable patch or allotment gardener, this probably isn't too much of an issue.

The number itself is from the percentage of the elements contained within the feed so 5.5.5 feed will be 5% nitrogen 5% phosphorus and 5% potassium.

Below we have a few feeds that can be found on Amazon that we have used in the past. Should you wish to purchase them please click on the image (I also earn a commision through Amazon if you click on the link to buy of which I really appreciate)

First, we have a tomato feed which is high in potassium

Next is a tub of growmore. This is a well-balanced fertiliser with equal levels of all elements.

Next, we have q4 vitax which is fertiliser I am trailing this year. Its npk levels are 5.7/7.5/10 so is high potassium. This fertiliser also contains plenty of other trace elements and minerals.

What plant food or fertilisers do you use? Let me know in the comments below.