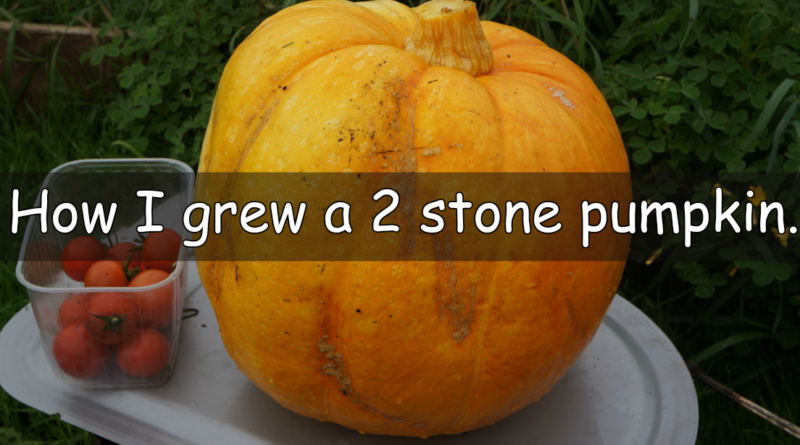 If you listen to the podcast, you will know that this year I managed to grow a 2 stone pumpkin. Whilst 2 stone is a personal record it certainly isn't going to break any show records. nonetheless, I feel it's still an impressive size and has provided us with several meals (I still have plenty in the freezer). Let's evaluate how I managed to grow this pumpkin and if we can improve on it next year.

The seeds I selected was big max from Wilkinson's. This variety is known for its large pumpkins. I sowed the seed in late April in a pot of John Innes number 1 and placed the pot in my heated propagator.  The soil was misted every day and monitored for growth. Within a week the seed had sprouted and popping above the soil. I moved the seedlings into another heated propagator but with the vents open for better ventilation. Once true leaves were growing each seedling was potted into individual pots. These pots were outside the propagator to grow on but without the extra heat. They still had some protection as they were still inside the potting shed.

Over the next couple of weeks, the plants got moved to the greenhouse, then into the cold frame to harden off before planting out.

Now the planting out is where I feel the real difference was made. In the past, I have just grown pumpkins on the ground just like most of my plants. However this year I decided to do something a little different and plant them in my compost bin. Originally this was to maximise my growing space but it also provided the pumpkins with extra warmth and nutrients to grow big pumpkins. This compost bin was located behind the shed on the allotment which gave it some shelter and shade during the hottest parts of the day.

To prepare I filled the bin up with my usual garden waste and compostable material. I added a layer of cardboard followed by a layer of well-rotted horse manure to the top of the waste material. This was then covered this with black weed suppressing membrane. Then I cut slits through the membrane and planted the plants into the manure below. I watered it well and made sure i watered in regularly over the next few weeks to establish fully. Some plants were lost at this stage but there was plenty spare for this very reason.

As the plants grew I watered regularly with a good amount of water. This not only watered the plants but also kept my compost moist to aid the composting process. I did not give any feed as I figured the compost had enough nutrients in it. However next year I may feed and water more.

As the plants grew and the vines spread, (gaining more sunlight as it grew) A plank of wood was placed on the ground for the plant to grow across as I was worried that I would catch the plant while strimming the grass. This was a mistake as it kept moisture around the plant and lead to rotting. However, as the plant grew I directed its growth in a route that kept it out the way.

As the plants flowered, pollinators came along and pollinated the flowers without any help from me. This set the squashes very nicely. The first pumpkin that set grew nicely soon followed by the second. If I was trying to enter a competition I would limit the number of squashes to 1 per plant. I grow for food so I kept the second growing. This proved to be a good move because as the first pumpkin came to ripen I noticed that there was damage to the side. My first thought was birds had pecked at the pumpkin but I was wrong. I discovered when I removed the squash it had rotted at the bottom due to the wooden plank. With the first pumpkin removed all the energy went into the second pumpkin which grew into the 2 stone pumpkin that this post is about.

I harvested the pumpkin once it had turned completely to the pumpkin orange colour we expect. This was around mid-October just in time for Halloween. I cut off the squash from the plant leaving a good amount of stalk on the squash. The pumpkin then got taken home and weighed before sitting on the kitchen worktop for a couple of weeks while we admired the squash and discussed it when visitors popped by. However, it was grown for food so one Sunday I set about processing the pumpkin so we could use it. This process involved cutting open the pumpkin removing the seeds and cutting away the flesh, took an hour and left me with a rather annoying blister. It was all worthwhile as We have had some lovely soups pies and risotto using it and plenty in the freezer.

I should add that I did get more pumpkins off other plants but nothing as big as this one.

Overall this pumpkin was very pleasing. I have said many times that I grow to eat not to show but if I was to show I would use this method with a few modifications

That is how I grew the pumpkin and what I would do differently if you have anything to add leave a comment below.