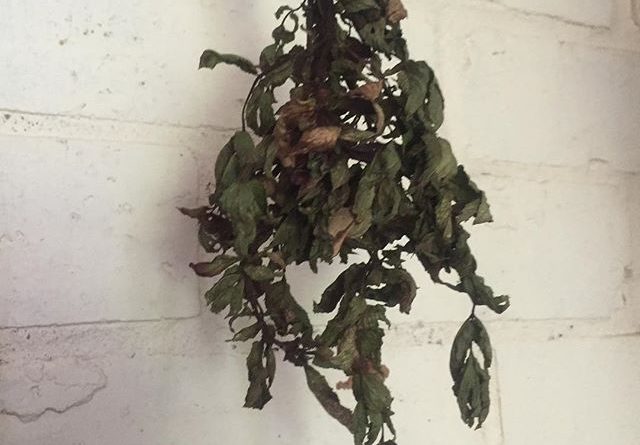 Hi guys I'm richard from the veg grower podcast this is episode 74 titled preserving herbs and it's the 25th July 2016.
Coming up today I'm going to discuss a few updates on the plots and then I am going to discuss a few methods of preserving herbs in the first of a series of episodes about preserving our harvests. It's been a hell of a week for me with work as saying me of you know my day job of a fridge engineer means I'm very busy in the summer when it gets hot but I'll much rather be in the garden.
So firstly the allotment tried the get there during the week but all I managed was to drop of some wood chip and put a net over the brassicas but yesterday I managed a few hours down there. The brassica cage is holding up but a little worse for wear those clips for making a frame from bamboo canes are pretty rubbish in my opinion. Talking of the brassicas I've noticed that some of the broccoli planted last week has gone to flower which is no use to me so I'll be digging those ones up soon and monitor the rest.
I spent about two hours weeding the beds again seems to be a running theme at the moment the damn weeds seem to grow as soon as my back is turned and it seems to be mostly bindweed and couch grass. But I did manage to give the root bed a good weeding and while I was at it I harvested some carrots just to see how they was growing, and while they where small they were a useful size, by my calculations they have been in about ten weeks so give a few more weeks and they should be a much better size. I also put in some beetroot plants from the potting shed towards the front of this bed it's probably a bit late for them but we shall see how they get on.
I then harvested a bag of homeguard potatoes of which I had a pound of potatoes in so a bit disappointing but enough there for us. However the potatoes that came out where incredibly clean and healthy looking.
I've also built another fruit bed this now needs cardboard in the bottom and then filling with manure ready for a fruit plant to go in later in the year.
I've also hoed under the gooseberry bush but the ground here is very very hard which hasn't made hoeing very easy at all joys of a clay soil and the summer heat I guess.

Now at home I wish I had a lot to say I've done but there really isn't much. The greenhouse has continued to have overgrown tomato plants everywhere I had a go at tying them back but it's still a mess however I have harvested the first tomatoes which are very tasty.
All the plants in the ground are growing nicely and the pumpkins are even starting to flower again a little late but better late then never. That being said I have lost all my cabbage seedlings that where growing in the cold frame I believe they have been eaten by slugs.
IT seems like this cold frame is susceptible to slugs where as the frame where I place things for there final hardening off seems ok.

Ok so the main topic today preserving herbs. I wanted to talk about this today as I'm preserving a lot of herbs at the moment as the supply is there to be used and I want to make the most of my herbs. Now I should say that not all methods work for every herb some are delicate that one method my not work for that particular herb but then there are other methods that will work for that herb. Unfortunately in the show I will not be able to go through every herb but this is more an overview but I shall in the future make a post with lists of herbs and methods so keep an eye out for that.
One of The simplest method has to be air drying, that is simply where you hang a bunch of herbs to dry. I have done this with mint, rosemary and sage. I've found it works best in the dark as light seems to make the herb go brown. To do this method is simple you hang it some where warm dark and well ventilated until dry and crumbly usually a couple of weeks then store the herbs in jars somewhere dark ready to use. Variations of this include using a dehydrator which can take drying time to a few hours but needs careful monitoring so as not to ruin the herb. I found that this way herbs turned brown easily but it's worth experimenting. Another way of doing this is make a solar drying stand of which the best way to describe this would be like a very small table frame with the top replaced with wire mesh. The herbs would be placed on top of the mesh and in the sun allowing air to get around the herb and the sun to warm it up. This is a popular way to dry herbs but again it takes some experimenting to get right.
Another method to store herbs is to freeze them. Now you can simply pick herbs give them a wash pat them dry, then place them into the freezer not forgetting to label them. Sounds simple enough but I have found this way some herbs discolour in the freezing process, so I found some other extremely good ways of freezing herbs. One way I found is too chop up the herbs and place them in ice cube trays, top up the trays with water or oil and freeze them. Once frozen pop them out the trays and into another container and put them back in the freezer. This way whenever I want to use a herb I just remove one cube and either leave it to defrost or put the cube into the dish as I'm cooking it. Very simple with an effective use in the kitchen. Now I said to top up with oil or water and again that is down to experimenting with which herbs work best for this and also what you will use it in, sometimes I will use one herb and make a tray with oil and a tray with water. For the oil I generally use olive oil but any oil will do but it may not freeze solid but it'll freeze enough. A good one to do this with is basil but in the form of pesto. Basil doesn't really freeze well in full leaf or chopped up but puréed with olive oil and pine nuts to make pesto and then frozen works very well.
Instead of oil another mode is to use butter and make a herb butter. For example a tablespoon of butter at room temperature mixed with a minced garlic clove and a teaspoon of chopped parsley makes a garlic butter that can be used to make garlic bread for example. To make larger batches use more of all the ingredients then place on grease proof paper and roll into a sausage shape. Place this in the freezer for about half an hour then make several cuts at 1cm intervals along the length then place into the freezer. When I want to use some I can then just snap off at the cuts and it's ready to use. A good one to use this for is to make a mint butter then use this mint butter over some boiled new potatoes and let the butter melt through the potatoes delicious.
Well so far we have dried herbs and frozen herbs well how about storing herbs in oil. This is one I do particularly with rosemary. I take a sprig of rosemary and put it in a bottle then fill the bottle with oil. The oil takes on the flavour of the Rosemary quiet nicely and stores the herb well. I use this Rosemary as an oil brush when cooking steaks by simply brushing over the steak with a Rosemary sprig and it gently imparts the flavour into the steak. With this method I see no reason why you couldn't use several sprigs in a bottle and simply throw the sprig away after using it this way.
In the same way as oil I have done the same with vinegar and made mint vinegars. The prime example of this would be mint sauce for roast lamb made by simply adding mint to vinegar with a bit of sugar and leaving it to steep then pour over roast lamb.
So what ways do you have to preserve herbs let me know in the comments.
This episode I've started something new I've not only recorded the podcast but I've copied the script to the blog post so you can listen or read this and whichever way you have absorbed this article I hope you've enjoyed.
As always please do visit my website theveggrowerpodcast.co.uk and let me know what you think.